Lesson: 18 Everything is meaningless; except what you believe. 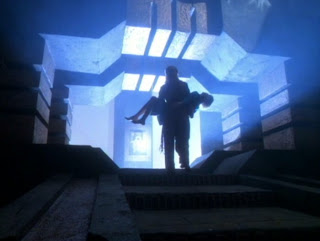 One of my favorite TV shows is Star Trek Voyager. I have most of the seasons on disk, and used to watch them daily after work as a way to unwind. After years of a hiatus from watching Voyager, I started watching them again from the first season.

The other day a came across a marvelous episode (“Sacred Ground”) that I had completely forgotten about, in this episode the crew has been invited to take respite on a planet enjoy their culture and sacred caves.

In the beginning of the show you see B'Elanna, Harry, Neelix, and Kes getting a tour of one of the sacred caves by the leader of the Nechani people (planet’s inhabitants). Kes the youngest of the crew is very inquisitive and goes off by herself away from the tour. She notices what looks like a doorway of super brilliant beautiful light. She goes up to it and the light field sends out a shock that knocks her out and sends her into a coma.

Voyager’s ship doctor and all their advance technology are unable to help Kes out of the coma. Captain Janeway looking any solution that might lead to help and restore Kes back to health, discovers a myth of the people of this planet where a King from long ago petitioned the monks of the caves to allow himself to go through a ritual to be purified so that he may ask the ancestral sprits to save his son. His son who touched the energy field and also ended up in a deep sleep, the myth states the King was successful and his son was saved.  Captain Janeway takes this story to the monks and makes her plea asking, if like the King, if she could go through the ritual to be purified, so she may also implore the sprits to save Kes.

The captain being a scientist and a woman of reason, really does not believe there are ancestral sprits that will save Kes, however she believes if she goes through the ritual she will gain enough scientific information that will allow them to help Kes. Captain Janeway, as a way to prepare reads all she can about the subject of religious rituals from all cultures.

When Captain Janeway shows up at sacred caves to meet her spiritual guide, she is surprised to meet a woman that seems to be anything than what you’d expect of a spiritual guide. Janeway advises that she is ready to do whatever is necessary and is willing to accept whatever challenges they give her.
The guide upon hearing this, states:”Oh it is challenges you are expecting”, they then begin. After some three days and endless challenges of endurance, strength, and spirit, Janeway is given the message from the ancestral sprits that everything is meaningless and she has all that she needs to save Kes herself.
In fact throughout all of the ritual, the guide states this point over and over, “Everything is meaningless”.
After Janeway is informed that she herself has all the answers she needs to help Kes, she goes back to her ship. Janeway is confident, with all the data her ship has been gathering while she was going through the ritual that they have an answer to save Kes. Oh, I should mention that while Janeway was going through all the ritual challenges, they ship was taking scientific data on all her bio status, based on a chip they implanted in her.
After all this though, Voyager’s ship doctor was still unable to help Kes. He announced after trying everything that it seems everything she went through was:”Meaningless”.

Janeway is stunned and goes back to the surface of the planet to speak to her spiritual guide. She implores her and says to her from the get go you have said everything is meaningless; however you lead me to believe that if I went through your ritual I could help Kes. Her spiritual guide informs her, that she led her nowhere; she went where Janeway desired. In other words it was Janeway who decided what the ritual would be and how it would be conducted. It was then that Janeway said the magic words: “I do not know”. The guide then said she was now ready to begin.

Well, it is suffice to say that in the end Janeway was able to help Kes, however it was only when she had the courage to say: I do not know the answers, and then she surrendered. However what ultimately allowed her to save Kes was also her faith, when everything in front of her; all reason deified belief, she took a leap of faith.
I’ve now watched this episode three times in the past couple days. It has really hit home with me in my path right now. In the past several months, I quite my 9-5 job and started my own company. The day after I quit, I started head on, doing a million and one tasks, to get the word out there on my firm and what we had to offer. It’s really been a challenge and I’ve worked my butt off. In February we hit a bump and our computers failed for two weeks straight. Then this month I was hit with the flu that had me out of commission for almost two weeks. A week or so ago I like Janeway was thinking to myself that I’ve taken every challenge to make this business work, why does these mishaps keep coming up. Well, it occurred to me as this episode clearly showed, “Everything is irrelevant” and only has the meaning I give it. All that matters is what I believe.

During the past several challenging  months my confidences has gone up and down; at times I feel quite confident all will work out well, and at other times I feeling not the least bit confident. When my confidence would wan, I’d increased my efforts and worked harder doing more stuff. I figured the harder I worked, the better results I’d have, this has not been the case however. Taking a step back this week, I realized nothing I’ve been doing matters, what matters is what I believe; do I have the faith to believe that all will work out? Wow, in the past couple weeks a bunch of amazing opportunities have come about, and all I did was change my mind.
I now not only believe all will work out, I know it will even when all evidence may appear otherwise. I’ve taken a leap of faith, and I know God has my back. Thank you GOD!!!
Posted by Piper Mama at 6:11 PM

Piper Mama
Brooklyn, NY
Hello my name is Christina. Started my own Collections consulting firm,C³(Cubed) and I love to take mega-walks, and go flying on the weekend.